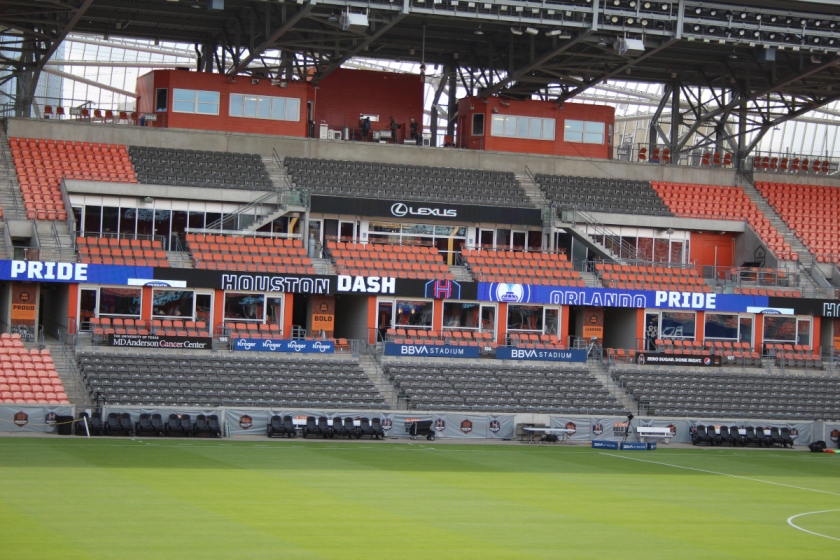 It was another scorching day at BBVA Stadium as the Houston Dynamo faced off with FC Dallas. As evening descended, the field turned into a hot sauna. It was so bad that I could not keep the condensation off of my camera lens. Oh how I miss the Astrodome.

Houston took the lead with a goal in the first half. But in the second half, Dallas scored back to back goals. Houston rallied late in the game with a goal and the game ended 2 – 2.

I have been watching this Houston team for some time now and something always goes wrong for them in the 2nd half. I am going to call it “chokeitis”. Houston has some good players but despite all the fancy maneuverings, they cannot get the ball in the goal. It is usually in the second half where they just get down right STUFFED. I hope that changes. DON’T CHOKE.

As a last note, I am seeing something happen, not only in soccer; but in all sports: tripping. In soccer, if a man is beating you to the goal, just trip him and take the penalty. In football, if the defensive back is beat then just trip the receiver and act like it was an accident. In Olympic track, if you cannot beat the guy ahead of you then just trip him. Fifty percent of the time the referee will not call it a foul. Sports is turning into a game of “Rollerball” at all levels.