Living in this age of COVID-19, the book by Alexis de Tocqueville, “Democracy In America”, keeps recurring in my mind.  The book comes in two volumes, published in 1835 and 1840.  de Tocqueville was the French Minister of Foreign Affairs in the early 1800s. He was taking a survey of the United States, but, personally, I think he was gathering intelligence.   Some say he was an extraordinary man; but, I feel that he was the average educated man of his time. 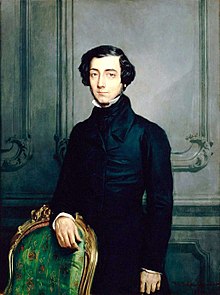 In a nutshell, de Tocqueville says that Democracy is a losing proposition; yet, the US is great because the people are great:  hardworking, honest, self-reliant, and they read their bible.  The US will remain great so long as the people remain great.  In other words, any broken system can work, so long as the people honestly collaborate to make it work.  Its sort of like a bad marriage.  Nevertheless, he makes clear in his 2nd volume that, sooner or later, the system is doomed, and here is why.

For de Tocqueville, a Democratic system is obsessed, not with freedom; but rather, equality – and I mean, completely equal in everything.  For instance, no one has a better job, better car, better house, better life, nor a better opinion.  The net result is what the great historian, Hannah Arendt, calls “atomization” – people are reduced to little small entities with no real individual power and they are isolated from each other, as atoms are in a crystalline structure.

Next, he says, people will start to drift in different political directions, since there is no cohesion between them.  In politics, leaders cannot make a decision because of all the infighting.  Socially, there is chaos, disorder, lawlessness, and rioting.  No one has the power to pull things together and make it right again,.  Thus, the tyrant naturally bubbles to the top of power.  No one really wants the dictator but there is simply no other way to restore order.  That is when a lot of nasty things start happening:  right wing death squads, military is mobilized in the streets, political witch hunts, and the gulags start filling up with “trouble makers”.

In my opinion, the current COVID-19 crisis is a fabricated attempt by our government to “atomize” us.  In the past, it was done with slurs, blackballing, reputation smearing, and things like that.  This is the first time our men in power have just come out in the open with it:  socially distance, stay quarantined in your house, no visiting friends, no football, no conferences, no night clubs, no nothing.

It is proven from science that people just do not function like that.  People can die from isolation alone.  Families cannot function like that; and lets face, neither can business.  As we know in the oil industry, we need our after hours drinks, the get together with work buddies for lunch at Ninfa’s Mexican Restaurant, friends coming over to watch the Cowboys vs the Redskins (?) on Sunday afternoons; we need those conferences, in person training sessions, and evening engineering dinners and technical presentations.  We have to accept reality for what it is and not try to force our own fantasies on reality.  The medium of business is socializing, not Webex.

If I can figure this out, then I know our leaders in government can figure it out too.  The only reason for this “shutdown” is specifically to atomize us.  We can never question authority so long as we are isolated and powerless.  What does the future bring?  I hope this has wakened people.  A “Brave New World” is just on the horizon.  Proof of this is our current state of things:  riots, looting, gun violence, voting fraud, embezzlement of federal funds, embezzlement of private funds,  destruction of business networks, dilution of private savings, and a political impasse at all levels of government.  They may have all the exits blocked, but we can still make our voice heard through peaceful protest.