I want to present to you this documentary about the conquistador Menendez and his struggles in Florida during the late 1500s.  Western Civilization rose to its pinnacle of power in recent centuries because of men like this.  Menendez was a man who had all the odds against him and yet he found victory.  I recorded this video sometime around 2005. 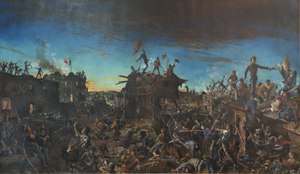 In the 1500s, Spain had claimed Florida as a colony already.  Cabeza de Vaca and Hernando de Soto had already explored the area.  However, the French decided to move in and challenge that claim.  Menendez was sent to settle the matter militarily.  Before Menendez could even make contact with the French, he lost half his fleet in a storm.  He then engaged some of the French ships and sent them running home.  Unfortunately, a hurricane hit Florida and Menendez was beached somewhere close to St. Augustine.  With only 500 troops left, Menendez engaged the French on land and was ultimately victorious.

I like to remember this story because it reminds me of how great Western Civilization was until very recently.  I remember great people in history, although, granted, those people are not held in high regard because of some flaws in their character.  Nonetheless, if you overlook their human weakness, you will see the solid values that our ancestors once had.  Cowardice was completely unacceptable.

These days, I talk to folks I know who tell me that many employees at work refuse to return to the office because they are afraid of COVID-19.  I look at what the people of Western Civilization used to be, and now look at what our leaders have become, and I actually get sick.  Our forefathers never would have run for the bunker in times of trouble.  So many of our ancestors would have rather gone to their deaths then show signs of fear.

How did things ever get this way?  I hope we can return to our former glory.  Please enjoy the video.