I know that everyone has heard about Senator Burr being placed in the cross-hairs of the FBI for some dubious stock trades that the Senator made right before this whole COVID-19 thing got rolling.  The entire affair will probably end up being back page news.  However, it is a bit unsettling that this is happening at all. 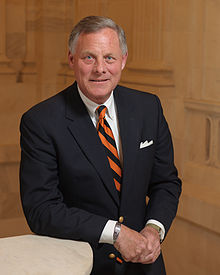 Over the years, I have read articles about how people in Congress never seem to lose money in the stock market.  The rest of us are getting slammed by bursting stock bubbles, virus lockdowns, and housing market collapses; but the congressmen always seem to come out on top.  If this is so, then why Burr and why now?

Do not get me wrong, I like it when law enforcement gets the bad guy – but, the FBI?  After their performance in the Russian Collusion debacle, can anyone honestly listen to them regarding anything?  If they told you the sky is blue, would you believe them, would you look up just to verify?  They should put their time into investigating human trafficking across the Mexican border and busting coyotes.

The reason I say this is because Burr is a republican senator from a very red state, North Carolina.  In my opinion, the Senate is the last line of defense protecting President Trump.  If that goes, Trump is finished.  We know from experience that truth does not matter to the Democrats in Congress.  If they want Trump impeached, then he is out, and that is the end of the discussion.  Trump survived only because of the Senate, which if I remember correctly, has a majority voting block by only 2 or 3 votes.  If Burr gets torpedoed, it is safe to say that Trump’s presidency will be placed in peril.