As you know, economists, as well as myself, have been saying that something is not right with the claim that unemployment is actually below 4%; and yet, there is no inflation in the economy.  That is true as regards Keynesian economics where the focus is on the demand curve ( see Figure below).  However, something that I have not heard yet is any argument that includes supply side economics.

Supply side economics is not really talked about anymore because it does not work, and we all know it.  The term was made popular during the Reagan administration.  It is also known as trickle down economics:  give all the breaks to the big boys who have the money, like tax breaks and reduced regulation, then watch the money trickle down to the rest of us.  WRONG.  I actually heard Reagan say this with his own mouth, but he added that the government should also include big juicy government contracts to the rich as well.  George H. W. Bush called it “voodoo economics”.

Supply economics says that inflation can be avoided by simply increasing supply, a.k.a. shift the supply curve to the right.  When demand pushes economic equilibrium past potential GDP, wages get bid up, output hits a wall, and the economy experiences inflation.  In supply sided economics, the tax breaks help free up money for corporate investment in plants, and the reduced regulations spur production.

Just because folks do not talk about trickle down anymore, does not mean it is not still in play with our government.  Trick down appears to just create a wider gap between rich and poor.  Millionaires are not like me.  When I get extra cash, I spend it on things I have been putting off, like car repairs, home repairs, new computer, gifts, BBQ party for friends and loved ones, etc.  If I were a millionaire and got extra cash, I would say, “thank you very much” and put it in a tax free bank in the Bahamas. 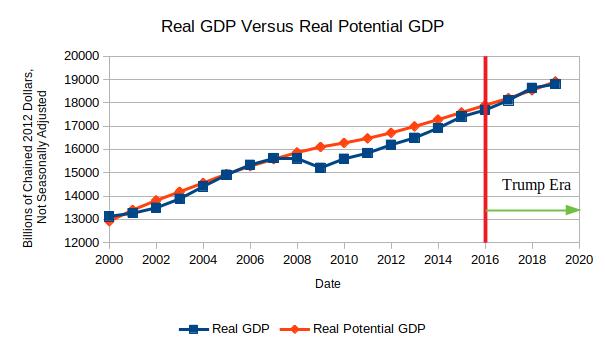 Assuming supply side economics does work, let us take a look at the economic numbers, see the Figure above.  The chart shows data taken from the Federal Reserve.  I get really nervous when I let the government tell me what reality is.  My second most favorite book is “1984” and every time I listen to anything emanating from the government, I get images of that Goldstein guy and the Ministry of Truth.  This data was not easy to get, I had to do a lot of digging (I had to estimate the value for real GDP in 2019 at $18800 billion).  It appears that our government actually forecasts potential GDP into the future according to the Fed website.  How does anyone calculate potential GDP?  The potential output of all labor and infrastructure?  Sounds like fuzzy math to me, but anyway.

The chart shows that GDP and potential GDP have been at par since Trump took office.  This would explain the fact that there is no inflation in the economy.  The far right claims this is due to Trump tax cuts to the rich and reduction in government regulation.  Trump is using supply side economics, he definitely believes in tax cuts and reduction in regulation.  Let us take a closer look at this.

In the energy industry, a reduction in regulations, as regards the environment, is definitely a good thing.  Dumping wastes into the air, land, and water leaves more profits for dividends and inflated stock prices.  According to the Brookings Institute, the very first environmental regulation reduction to take effect initiated by Trump was Lowering Renewable Fuel Standards for 2018, effective 2/12/18.  The Trump tax breaks took effect in 2018.  In my opinion, that is not enough time to push the supply side curve significantly to the right.

Our government says that unemployment is actually below 4%.  That means GDP would have to significantly outpace potential GDP.  The problem is no inflation and according to the chart, the economy essentially has been at full employment for the past 4 years. From the graph, I just do not see the economy being out of equilibrium during the Trump presidency.  What the graph shows me is that the economy naturally comes to equilibrium where GDP and potential GDP strive to be equal – government interference just causes disequilibrium.

Things are not making sense and the numbers are not adding up. Maybe what we are seeing is a bend in the economic time-space continuum?  I never was very good at “double think”.