I came across some interesting graphs this weekend that give some support to the notion that a rise in immigration is positively correlated with the rise in the stock market.  It is a complicated issue that involves world stability, baby boomers, retirement accounts put at risk on the stock market, and such things; but none the less, the trends are there. 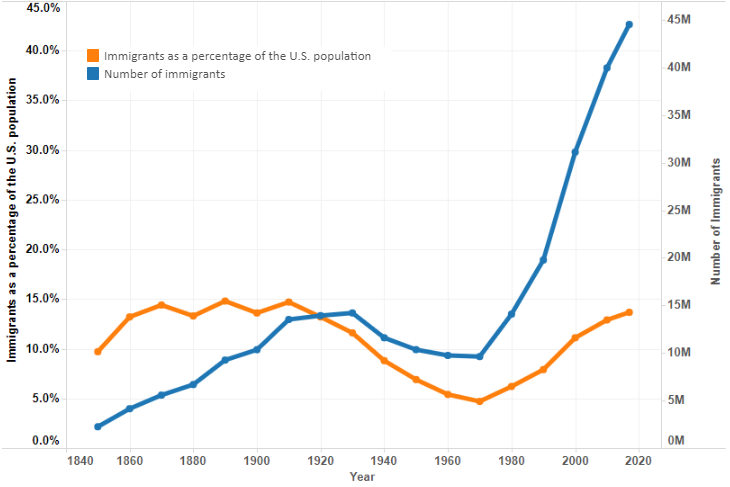 I was a foreign worker in Saudi Arabia and Kazakhstan, and I know first hand that as a foreigner, your only protection is your employer.  In one case, I agreed to work 6 days per week (48 hours) and in the other I agreed to work 7 days per week – base pay, no overtime in both cases.  In the first country I did receive benefits like dental insurance but in the other country, none at all.  I can see why employers like foreign workers (particularly illegal) – make them work overtime for free with no benefits.

I used to teach economics at the university and I remember how the books essentially said that labor is the enemy of profits.  The reason is because wages are “sticky” on the downside.  Workers form unions and they resist making deals that reduce their pay.  In a good labor market, workers are scarce, and they bid up wages.  Economist argue that this causes inflation; and ultimately, a correction where high costs force lay-offs and force labor to renegotiate wages.

During the 1970s, the US was experiencing something called the “wage price spiral”.  In other words, workers bid up wages, so employers increase goods prices; the workers bid up wages again, and employers push up goods prices, etc.  Companies do not like that, but the 1970s were some of the greatest years of my life – everyone had money.  Ever since the 70s, the Federal Reserve has maintained a policy that it will kill jobs with higher interest rates when there is the first hint of inflation – the worker is the enemy.

Makes sense to me now why industry would tell our elected leaders, “we cannot find good people”.  Immigrants have fewer rights.  Employers can get them to agree to work overtime for free and with less benefits (or none at all).  Furthermore, the labor market is always weak so that workers cannot bid up their wages.  That means profits, and from where I stand, this is clearly manifest in the stock market.

The first chart in this article shows how immigration has surged in the US, essentially starting after 1980, and skyrocketing after 2000 – remember in 1980 we had just experienced the infamous wage price spiral.  The sources for the first chart do not clarify if the immigration numbers are legal, illegal, or both – political correctness is so important these days.  Nevertheless, there you have it, a fairly clear positive correlation between immigration and the stock market.

The current political environment in Washington appears to be changing today.  We have a president that is outspokenly pro-labor, and a Fed that is not so proactive about stomping on employment.  I frequently speak to business people and say that “American business should be patriotic to American workers”.  Their response goes something like, “Where does it say we have to be?  It is about profits”.  I think to myself, but I do not say anything, “It is the law?  Why else does humanity affiliate itself with a tribe or a nation?”