As is said in Part 1 of this series, traditional economics is dumbfounded in explaining how the US currently has “overemployment” and no inflation.  Some economist have tried to say that traditional economic theories are no longer relevant and that a new age is a head.  Sort of like Einstein saying that Newtons laws are no longer relevant  and that as one approaches the speed of light, time slows until it stops.  I am not convinced.

In order to understand the Trump Effect on the economy, one must look at the history of how the US Federal Government is managing the economy.  I have been listening to the presidents and the Fed Governors for over 30 years and it is clear that they are infatuated with inflation.  The problem is that the Feds have a twisted way of attacking the problem of inflation.  In a nutshell, check employment, adjust interest rates, monitor inflation.

For the Federal Government, the key indicator of inflation is high employment.  As was said in Part 1, if unemployment drops too low; then labor becomes scarce and that means wages are bid up higher. Unemployment must be maintained at the “natural rate of unemployment”   Labor for corporations is probably the largest expenditure.  To a “bean counter” it stands out like a sore thumb – more then rent, or materials, or taxes.  Labor is seen simply as a resource like lumber, oil, and water.  Rational human beings bid up their value when it is in their interest, so this is a problem for business and government and the industrial-military complex.  The Figure above is a plot of the unemployment rate since 1965.

The cause of inflation is seen as overemployment.  Low interest rates are appealing to business and lead to more loans.  An increase in loans leads to development and creates new jobs.  Thus, when inflation raises its ugly head, the first move of the Fed is to reduce employment via higher interest rates – cut back on loans and you cut back jobs.

The Figure below is a history of how the Fed has manipulated the Discount Interest Rate since 1965.  Let us take a look at a few select years.

You might be wondering why the Fed is so concerned about inflation.  This is because inflation helps borrowers and hurts lenders.  If you borrow a dollar this year and inflation reduces the value of the dollar to 50 cents next year; then you are only repaying 50% of the money you borrowed.  Banks do not like that and the Federal Reserve is the “banker’s bank”. 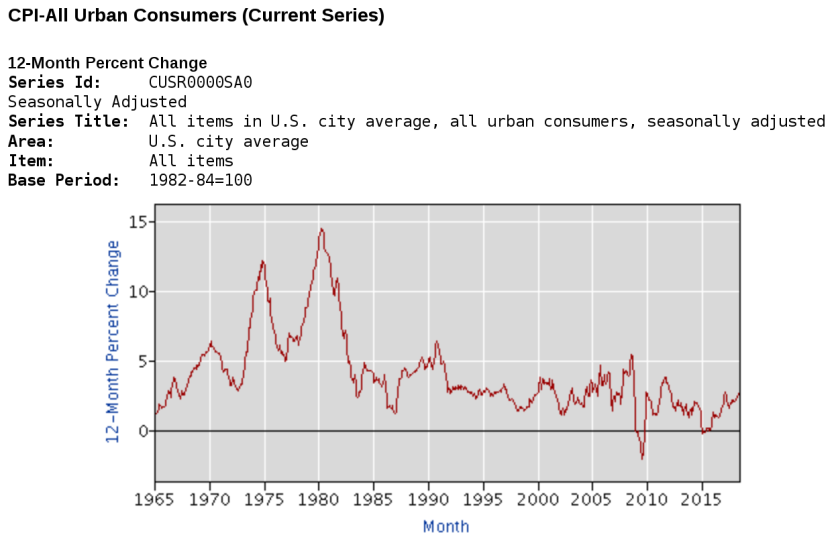 The Figure above is a history of inflation since 1965.  Paul Volcker became the Fed chairman in 1979, and it is clear that his approach to monetary policy was to take a sledge hammer to the economy – no inflation here.  In my opinion, it is Volcker who created the Savings and Loan Crisis of the 1990s.  The lost of jobs made it impossible for people to pay their mortgages.   The US has been committed to low inflation ever since, even if it means negative inflation.

From 1977 to 1981, Jimmy Carter is president of the United States.  I very much remember the time from 1978 to 1981.  Carter did not really agree with economists that inflation must be countered with unemployment – the target is the natural rate of unemployment.  Thus, 1978 to 1981 is the greatest time period I have ever seen in my lifetime:  there were jobs, money was circulating, there were opportunities, I had summer jobs at multinational engineering firms, and I also attended an out of state private college.

Although Carter did some pretty dumb things, like set the speed limit at 55 mph and fumble the rescue of the American hostages in Iran, he nevertheless did get some things right.  Here he is, in his own words, at the 1976 Democratic National Convention:

I believe that anyone who is able to work ought to work–and ought to have a chance to work. We will never have an end to the inflationary spiral, we will never have a balanced budget—which I am determined to see–as long as we have eight or nine million Americans out of work who cannot find a job. Any system of economics is bankrupt if it sees either value or virtue in unemployment. We simply cannot check inflation by keeping people out of work.

Here, Carter is taking a jab at the concept of natural rate of unemployment.  In other words, it is contradictory to cheer someone’s loss of employment because that will make the economy better.  The economy is not better for the guy who lost his job.

In Part 3 of this series, I will discuss how Trumponomics is the new Theory of Relativity in modern economics.  Actually,  we will probably find out that Trumponomics is just the same ole Classical Newtonian Physics.