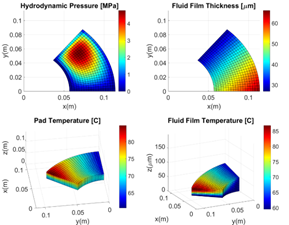 The Turbomachinery Laboratory at Texas A&M University has developed a fast and accurate computational design tool for tilting pad thrust bearings that surpasses the capabilities of competitors’ technology and adds value for current and future industry research partners.

XLTHBR® closes a gap for members of the Turbo Lab’s Turbomachinery Research Consortium (TRC), an exclusive organization of major turbomachinery developers and end-users who join with the Lab to answer important questions about performance and reliability of rotating machinery through research. TRC members have exclusive access to XLTRC software, a suite of fast, experimentally verified codes for executing complete lateral and torsional rotordynamic analyses of rotating machinery. Until recently, the XLTRC software suite was missing an important component: thrust bearings.

“This analysis tool is more advanced than any other tool of its kind,” said Dr. Luis San Andrés, lead faculty researcher on the project. “Our TRC members do not have to join another research consortium to get what they need. We have the top-notch technology to keep our members and recruit new ones.”

In XLTHBR®, a thermohydrodynamic model couples a generalized Reynolds equation for the film pressure, including cross-film viscosity variation, a 3D thermal energy transport equation for the film temperature, and a heat conduction equation for the pads’ temperatures. Predictions are benchmarked against archival test data for a six-pad tilting pad thrust bearing (228 mm outside diameter) operating under a specific load of 0.5 to 2.0 megapascals (MPa) and with a shaft speed of 1.5 to 3.0 krpm (36 m/s maximum surface speed). The predictions agree with the test data with a maximum difference of eight percent for the peak pressure, 17 percent in maximum pad temperature, 20 percent in minimum film thickness, and eight percent in drag power loss.

Version 1 of XLTHBR, released to TRC members in September, is specific to laminar flow thrust bearings and includes the following features:

XLTHBR® delivers bearing performance predictions and displays 2D and 3D plots (see Figure above). Predictions include for a given set of axial loads and shaft speeds:

“We have a superb code, even for Version 1,” said Rasool Koosha, a doctoral student in the Turbo Lab who has worked alongside San Andrés on the project (see Figure below). “Because this code is newly-developed, we are using the most advanced computational methods. Within a year we will have the number one code in the world.”

Koosha and San Andrés have secured funding for at least one more year of research on XLTHBR® through the TRC. The pair will enhance the tool by including elastic deformations in the tilting pads from mechanical pressure and thermal effects, as well as fluid inertia and turbulent flow effects.

“We are proud to release XLTHBR®, but work of this caliber is commonplace at the Turbo Lab. When you are surrounded by an extraordinary person like Dr. Childs, the extraordinary becomes normal,” San Andrés said, referring to Turbo Lab director Dr. Dara W. Childs.